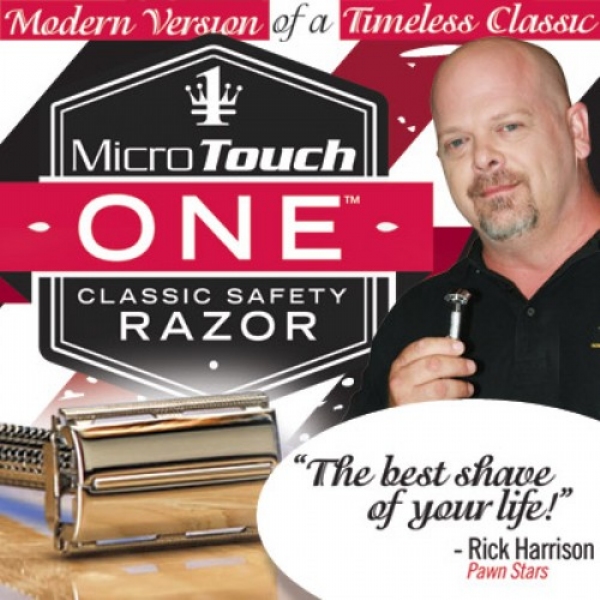 In Stock.
Micro Touch One Razor the modern version of a timeless classic.

Qty:
Out of stock.

Add this to your wishlist to get notified when it's back in stock, or check on Amazon.

Free Shipping on this item!

Customers who bought this also bought

using little pressure after soaking my stache this thing cuts closer then most multi blade shavers i have used, after a few uses the blades break in and cut even smoother as well and so far will last about a month each blade making this way more worth the money then the expensive multi blade shavers on the market, being my first time using one of these and not one cut or nick it's really nice to have.

Easy to use and clean. Great shave!

I just bought this today at WalMart. I was there to buy some cleaning supplies, toiletries and Mach 4 blades. I couldn't believe the price for ten Mach 4 cartridges -$26.00 !!! So I went hunting for alternatives. Disposable razors have never worked well for me. I have extremely coarse facial hair and unless I can rinse through the cartridge they get clogged easily and shave more like duct tape than a razor. To top that off I have extremely sensitive skin and am prone to bumps and irritation. I had considered a straight razor and a safety razor for some time and done my research. Obviously the higher end cut throats and safety razors can be quite expensive so I was intrigued when I saw the Microtouch advertized on television. After hunting through the aisle with shaving supplies I eventually gave up and grabbed this thing by the checkout stand. My initial impression was one of skepticism. The razor seems well made, with the construction seeming quite adequate. Installing the first...

I have used Gillette Sensor (and later, Mach 3) blades since I started shaving, 23 years ago. They both do a great job, but the price of the Mach 3 blades has gotten out of control. You'll pay roughly $10.00 for 4 cartridges. Disposable razors, such as Bics or Gillette Good News weren't an option for me, as they always were rough on my face and caused a lot of irritation, afterwards. So, I began to consider an alternative. Originally, I was going to try a straight razor, but after realizing the maintanence (sharpening, stroping, etc.) they would require, I ruled them out. Then I saw a commercial for this razor. I saw it several times before I ordered it. Finally, I took the plunge. They had a special going on where you got the razor and 24 blades for $19.99. Talk about a no-brainer. My first shaving experience did not go so well. I can really whip around and do a quick shave with the Mach 3, but not so with this razor. I paid for it. Razor bumps,...

this razor works great, and it does not color your hair but then i ddid not buy it for that reason

I am 83 with somewhat shaky hands. This razor was easy to old and use. I only shave a couple of times a week, but I recently let my whiskers grow too long, and this razor did the job completely. (I cannot use the computer, so my wife, Ginny, is typing this for me.)

The razor worked well until it broke

I needed to change my shaving device due to the unaffordable price of the multiple blade razor heads I've used since the 1970s. I got an excellent shave the first time I used it, despite having forgotten how to use the gadget in 45 years. To my amazement I continued to get excellent results with the same blade, shaving daily for an entire month. Completely satisfied beyond my expectations.

I started using a DE about 6 months ago and got this as a gift. I will admit I was skeptical at first about using this product, but am very impressed. The price is great and I use feather blades with it. I always shave after a hot shower and it gives a very close shave. The blades that come with it are decent, but not incredibly sharp!!

If removing more than 2 days growth, care should be used and you WILL get pulling ! As a daily shaver, it does as good as the multi-blade razors. To get a close smooth shave, you will have to go against the grain, which should be done with caution.

Like everything about the product except the short handle.

Bought this for my husband for Christmas. He really likes it and says it does a good job. He shaves not only his face except for mustache and chin beard but also his full head. We feel it was well worth the price.

This product is gr8

He used to use one when he was younger, now he says he will use this razor from now on.

Have not used a safety razor in close to 40 years. I forgot how close a shave you can get. This razor is as good as it comes. Lightweight  even the blades that come with it give a barbershop close shave. Will never go back to the 3 or more blades they charge for again! Thanks for putting out such a great product.

Best shaving experience - It takes more time but so worth it.

I had forgotten how good a shave was using a double blade safety razor. This is the type razor that I started on and used a a young man. Then came the disposables. I liken the disposable razor industry to the golf club industry in that bigger, or more blades in this case, is better. This razor does an excellent job and performs exactly as advertised.

I have been using disposable razors for almost 30 years and this is the first REAL blade razor that I have ever used. I shaved my head, face and neck with no cuts or nicks what so ever. I had 4 days of growth and this razor did not clog one time and it also shaved very close. The metal feels great when it heats up from the hot water. I also like the old school design.

Cleans easily, opens and shuts easily. Handle fits just right in my hand. No parts to lose. One nice sharp blade I can keep dry and sharp, I wipe it dry on a Kleenex, zap it with the blow dryer and leave it partially open. Makes me smile when I shave. I have a heavy beard in a goatee style, now it's easy to shave close, haven't cut myself yet. Nice to have low tech that works perfectly.

All ratings are from verified customer purchases.

You must be signed in to rate this product.

Brand logos ® © their respective trademark holders. Not all products have appeared on television.