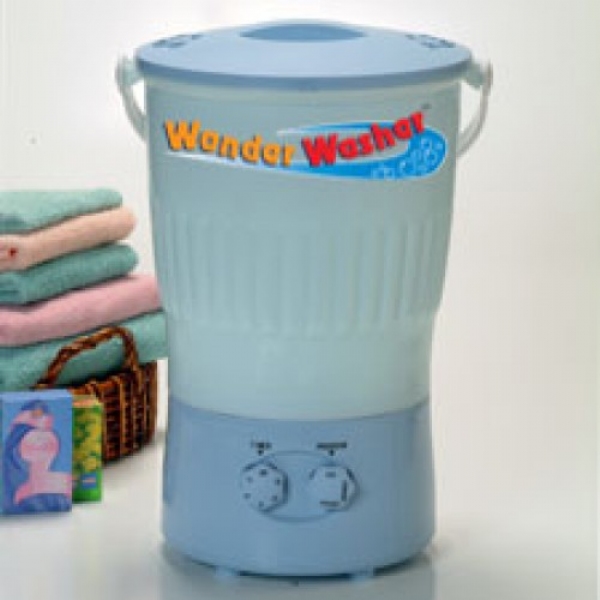 In Stock.
A compact, portable washing machine that goes anywhere!

Qty:
Out of stock.

Add this to your wishlist to get notified when it's back in stock, or check on Amazon.

Free Shipping on this item!

Wonder Washer is a compact, portable washing machine that goes anywhere! Wonder Washer can handle anything from delicate lingerie and blouses to sweater and it's easy to use. Just fill the portable washer with laundry, soap, water, close the lid, and plug it in. Specially designed drain holes in lid allow water and soap to drain without removing laundry. Wonder Washer is great for small apartments, cottages, the RV and more - anywhere space is limited! Wash on the go with Wonder Washer!

Quiet operation, so you can nap while your clothes are washing

Up to 15 minute timer

High and low speed settings for your wash

Affordable price will save you money

Customers who bought this also bought

Very disappointing.. It wasn't abused or anything, it just started to crack on the bottom and eventually cracked all the way thru. Unfortunately, parts are not replaceable. I definately don't feel I got my moneys worth, since it was only used about a year. Take it as disposable, and you won't be disappointed! Maybe it'll last a little longer for you? Other than that, it was quite handy while it lasted!

I love this product because are family has a cabin up north and there are tw I other family there so I bring this product and ALL my friend have one and we love them.

My mom has wanted this for a long time, so I bought it and was surprised by how well it actually works. It won't work for heavy or really soiled clothing, but just for those items that need light to moderate cleaning. Be prepared to lift it when its filled so don't over

used to- so-far washed, 3 socks (1 1/2 pairs lost 1 somewhere it seems), 2 pair of undies  1 pair of shorts, all in 1 load / washing, ran it through twice cos water looked like coffee after one 15 minute cycle Soon I will try washing a pillow casse or 2  some white T-Shirts Great- portable, light weight, compact, Lids design is nice for draining it keepng clothes inside while you flip it side ways then upside down, It arrived over 3 weeks before I was told it would be here, be great for colledge kids, bachalor apts, kid move out on their own, can hang stuff on hagers in shower to drip dry if you don't have a clothes line Not So Great- its way over priced (in all it cost me $105.00, The shipping price jumped from $8.95 to a wapping $29.95 just cos it had to be shipped to Canada, talk about gouging people, it does not adgitate it just goes 1 way direction several turns then stops an goes other way several rotations, I would not suggest putting clothes in a dryer after was is done since they;re pretty wet sill, ni spin cycle with this micro washing machine, it's a bit noicy, looks like it can break real easy have to see how long it lasts, I seen peoples comment saying it did 2 to 4 loads an broke / stopped working, see some say it lasted a year  others said 2 years, how many loads it will do, and have to see how my whites turn out later today / tonight or tomorrow NOTE: After my 1st unutial test run of washing a load of Black  DSark Blue items the water was filthy, So I gave them another 15 minute run with fresh clean water no soap, water had a slight tinge to it so I'd say it got some / a-lot of dirt out of them,

THEY CALL ME MISS WONDER WASH AT WORK...I JUST LOVE IT SOO MUCH GONNA GET ANOTHER ONE.

I died to have this because I lived in a building that wouldn't allow me to have my own washing machine so I thought this was the next best thing. Then one Christmas my mother surprised me with this and I couldn't wait to use it. I got good use out of this for a little over 2 years and then all of a sudden it stopped working. The motor was still running but it wasn't powering the unit and there was no troubleshooting I could do to fix it so I ended up using the bucket to mop my floor. I would only recommend this only if you don't have high expectations of it lasting past 2 years. I only used mine every few months when I only had a few pieces to wash and it worked like a charm until it broke down on me.

All ratings are from verified customer purchases.

You must be signed in to rate this product.

Brand logos ® © their respective trademark holders. Not all products have appeared on television.